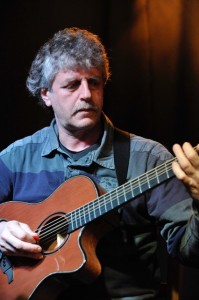 Gilles Le Bigot, whose professional guitarist career began in 1984, is very famous in the world of Celtic guitar. For 25 years, he’s been involved in many prominent musical projects such as ’ L’héritage des Celtes’ and notorious folk bands such as’ Kornog’,’Barzaz’ and ‘Skolvan’. He has also toured with many worlwide known artists such as Donal Lunny, Karen Matheson, Karan Casey and Carlos Nunez.

His style, which is his hallmark is very recognizable since it relies on the DADGAD system ( open tuning), which has now become the most widespread playing style in Breton music.

Gilles is also famous for his beautiful compositions and delicate arrangements and has participated to thirty albums.

In 2002, he recorded his first solo album, entitled ‘Empreintes’, then the sequel, ‘Empreintes 2’ was released in 2011, featuring Gildas Arzel and Jean-Félix Lalanne, with whom he set up the show ‘ Autour de la Guitare Celtique’.

The collaboration with Jean-Félix Lalanne started on stage in 2009 ( with John Renbourn and Stefan Grossman) .

This led to a collaborative work in a big show, ‘Autour de la guitare’ at the notorious Paris Olympia venue in March 2011. Throughout this project, he’s been on stage lately with Tina Aréna, Michael Grégorio and Paul Personne and has played for this occasion with the most talented French guitar players ( Michel Aumont, Jean-Marie Ecay, Laurent Roubach, Patrick Manougian, Solorazaf, Louis Winsberg, Patrick Rondat and many others…)

GUITAR WORKSHOP with GILLES  LE  BIGOT  www.gilleslebigot.com
(This will be given in French and Engish)
This workshop is above all an occasion for pleasure and relaxation– pleasure to come together to learn new songs and techniques, each at one’s own pace and level.
My role is to best meet your expectations as you enter into my musical world, and to ensure that you leave with lots of new ideas to explore.
Level required: At least 2-3 years of experience in standard tuning.  In this workshop different levels are made possible by alternating group with individual work.
TOPICS: Study of open tuning: The guitar being tuned DADGAD, we will work on different chording positions, accompaniment approaches and appropriate guitar works.
Repertoire: Celtic music
Techniques discussed: Working with both pick and fingers through a variety of songs and accompaniments. Appropriate exercises are offered in both techniques.
Rhythm: A look at different right hand rhythms in the accompaniment of dance music, along with relevant exercises in these rhythms.
Harmony: The goal is to provide some approaches to the harmonizing of melodies, and will be illustrated with specific examples of accompaniments in Breton and Irish music.
Material: Something to record portions of the workshop. Scoring will be in tablature.
Bring a pick and a capo.