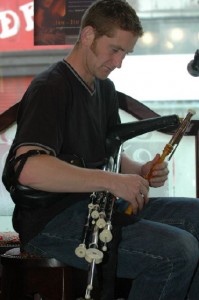 Tiarnán started playing the uilleann pipes when he was around nine years of age, so he has more than served his 21 year apprenticeship.

He was attending whistle classes in The Armagh Pipers Club when he was moved into the Uilleann pipes classes. (for reasons of misdeameanour or boredom!! Who knows !!. Fate perhaps.) After some years with Brian, Tiarnán was then moved into Mark Donnelly’s class in the Armagh Pipers Club. Tiarnán is indebted to both for their time, patience and generosity with their music. Sadly Mark passed away tragically in 1998.

Tiarnán was a member of a ceili band in Dundalk, Ceoltóirí Óga Oirghiall.

He has been touring and performing on a regular basis since 1995. His music has taken him to Europe, United States, Canada, Japan, Africa, New Zealand and Australia.

Pipes
Tiarnán first pipes were a practice set of Robbie Hughes pipes on loan from Brian Vallely. He now plays a full concert set that Dave Williams made in 1997. The set is made of African Blackwood and stainless steel. Dave died tragically in 2004. Tiarnán also plays an Eamonn Curran concert pitch boxwood 14 inch chanter and a B-flat chanter made by Brendan O Hare.