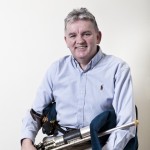 Gay Mc Keon has been on the Board of Na Píobairí Uilleann since 1987, when he became Secretary. He subsequently served for five years as Treasurer and was the Chairman from 2002 until 2006. He comes from a Dublin family noted for their involvement in Irish music – his father Tom was one of the activists who kept the Dublin Pipers Club running in the mid years of the last century.

He is surrounded by piping; his brother Tomás and his two sons Conor and Sean also play. Along with his sons Gay has made two CDs, Irish Piping Tradition (1997 – CDGMK001) and The Dusty Miller (2005 – CDGMCK002).